‘They look as if they were dropped there overnight,’ says photographer Ismaël Gueymard of the communist-era monuments he shot on top of Bulgarian mountains.

These structures, which range from spaceship-like discs to Cubist monoliths, jut proudly from the country’s bleak, wintry landscape – political propaganda for a bygone era, flung out of time. While hundreds of monuments were built by Bulgaria’s communist government from 1944 until its collapse in 1989 – many celebrating the country’s special relationship with the Kremlin – it is though that fewer than 150 of them remain.

Montreal-based Gueymard took a 10-day, whistle-stop tour across Bulgaria, travelling through the mountains down to the Black Sea to capture some of the last survivors.

‘Bulgaria’s communist monuments aren’t as documented as ex-USSR or former Yugoslavian monuments,’ he says. ‘Of those I’ve seen, the only ones that haven’t been abandoned are those that don’t refer to the country’s history of communism – and the USSR’s influence.’

Gueymard opted to create simple portraits of the structures, many of which are on the precipice of ruin, like the Buzludzha Monument, stripped bare and left to the elements. ‘I have been told that most of the fireplaces in Kran, the village at the bottom of the mountain, are made from marble that once paved the auditorium,’ Gueymard adds.

‘I don’t think there’s any political will to preserve these buildings. The discomfort they evoke might still be too strong,’ he says, alluding to decades of economic and social hardship forced by the Bulgarian Communist Party onto its subjects. ‘The locals didn’t really understand why I liked them – or would want to document them. I guess they find them repulsive and would rather hide them from tourists.’

The experience of capturing them was almost otherworldly for Gueymard.‘There’s something superhuman or extraterrestrial about these structures… as a foreigner, you react almost as if it were some kind of UFO encounter.’ 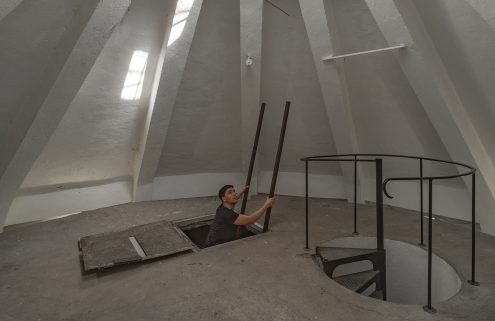