How the designers brought David Lynch’s vision to life

Location is integral to visual storytelling, and a setting can even function as a central character. A case in point is David Lynch and Mark Frost’s cult TV show Twin Peaks, which ran for two seasons in the early 1990s. Now it’s back after a 26-year hiatus – as are its iconic interiors, reborn for the show’s much-anticipated comeback.

While the Douglas fir-carpeted landscape established the atmospheric, mystical tone, it’s the interior settings – some disarming in their everyday quaintness, others unsettlingly surreal – which made Twin Peaks such an immersive viewing experience.

Set against the picturesque Snoqualmie Falls, the Salish Lodge & Spa was again transformed into the Great Northern Hotel for season 3. This old building has played host to many classic moments from the show – it’s where Special Agent Dale Cooper (Kyle MacLachlan) was first visited by The Giant – although scenes around its most recognisable feature, the registration desk, were actually shot at the Kiana Lodge some 60 miles upstate.

Beyond the pilot episode, however, the set was moved to a Los Angeles soundstage where it was reconstructed for the show’s return. This time around it was Cara Brower’s job to make sure all the wood furniture and ornamental props were in keeping with the lobby’s ‘hunting lodge’ theme.

The Salish Lodge & Spa still doubles as the hotel’s exterior, and you can even book a stay there – the ‘Great Northern Escape’ package is popular among diehard Twin Peaks fans.

With its floor-length crimson curtains and black-and-white chevron flooring, the Red Room is synonymous with the ‘Lynchian’ style found throughout Twin Peaks.

Season 3 was primarily filmed across Washington state but the Red Room was built on another LA soundstage. Lynch designed the set himself, and he evokes the initial sense of unease felt by Agent Cooper (and the viewer) upon first entering it by restaging several scenes from earlier seasons – which makes perfect sense given that characters can only access it in their dreams.

Referred to at one stage as ‘the waiting room’, this undeniably eerie space – a sort of inter-dimensional halfway house – is sparsely decorated with only a set of armchairs, a pair of fluted floor lamps and a marble statue of the Venus de Medici. The room’s stark, high-contrast style make it the show’s most enigmatic and iconic setting.

At first glance, this Twin Peaks institution hasn’t changed much down the years, even down to the turquoise outfits worn by Shelly Johnson (Mädchen Amick) and the other Double R waitresses. Yet while the exterior and many of the interior scenes were shot in the rural community of North Bend, WA, at Twede’s Cafe, the building was almost destroyed by a fire in 2000.

In order to get that authentic Twin Peaks look for season 3, Ruth De Jong and the production team had to strip out the refurbished decor and restore the diner to its former, retro-kitsch self. This meant sourcing period-accurate props and custom making the bar stools and unmistakable checkerboard floor. A traditional hangout spot for fictional residents and real-life locals alike, the Double R diner is famed for its cherry pie and damn fine coffee. A true slice of Americana which only adds to the show’s cult charm.

The Sheriff’s Station features heavily in all three seasons. Once the office of the Weyerhaeuser sawmill, which closed shortly before filming got underway in 1989, it is currently home to a rally car racing school. Most familiar to fans will be the interrogation room where Agent Cooper began his search for Laura Palmer’s killer.

The building has changed hands several times since the show’s inception. Chief set decorator Florencia Martin brought back some of the station’s original details, namely the wood panelling and landscape paintings which adorn the walls, but also the plates of assorted doughnuts that are always so gratefully received by peckish officers.

Certainly it still has the same small town look and feel about it in season 3, suggesting that perhaps nothing ever really changes here after all…

Read next: From Luhrmann to Lynch – how film directors do interior design 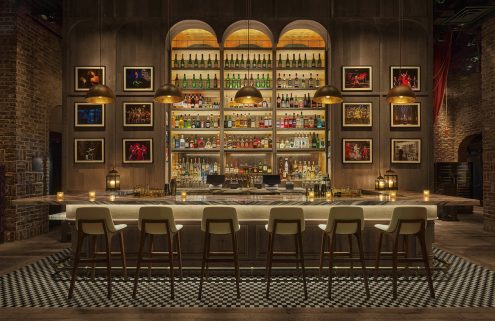