Inside the London duplex designed for artist Allen Jones

A cathedral ceiling of glass crowns the upper level

The duplex overlooks Charterhouse Square, between Smithfield Market, Farringdon and the Barbican, and the original red brick structure dates from the 1870s when it was designed by Scottish architect Coutts Stone as a textiles and hat factory. In the 1970s, a consortium of artists including Allen Jones, Richard Wentworth, Howard Hodgkin and John Hoyland took over the building, with Jones claiming the two upper floors.

Allen enlisted Piers Gough of practice CZWG to convert the space into a duplex penthouse, installing a soaring glass ceiling in the upper-level – his studio – to flood the space with light.

The duplex is now on the market via The Modern House for £5m. Its lower level has ornate iron pillars that help to zone the largely open-plan space. The kitchen and dining room overlook Charterhouse Square below, while the living room commands the bulk of the level, flowing onto a cosy library that follows the wall’s curve.

Two bedrooms are tucked at the far end of the artist’s home, with the master bedroom and its courtyard terrace accessed via a spiral staircase.

Artists’ homes on the big screen: when studios take a starring role 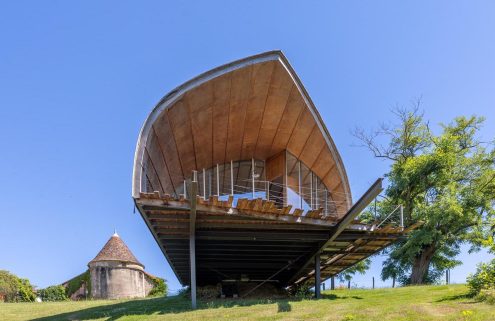