A contemporary cottage built around the bones of a 300-year old ruin has scooped the Architects’ Journal’s annual Small Projects 2017 award.

‘What is special about the project is the extreme length we went to preserve everything,’ Darby told the AJ. ‘Initially there was the prejudice to clear it up, but we realised the value of the project was in that extreme approach.’

Complete with dead ivy, sagging timber beams and an abandoned bird’s nest, the ruins are a ghostly focal point of the otherwise minimal 1,238 sq ft cottage, which cost just £160,000 to build. Its original brick fireplace has been fitted with a modern woodburning stove but the structure is otherwise left untouched, contrasting the crisp white walls of the newer addition.

Currently the cottage functions as a studio for Darby – principal of her eponymous architecture practice – and contains a living room, sleeping area and kitchen. It can also be reconfigured as a three-bedroom home.

Croft Lodge Studio beat stiff competition from 20 shortlisted entries, including MOS Architects’ Asylum House and Gianni Botsford Architects’ Layered Gallery, to take home the £2,500 prize, awarded by the AJ to projects built on a budget of less than £250,000.

Read next: An old Dundee mill will become one of Britain’s largest creative spaces 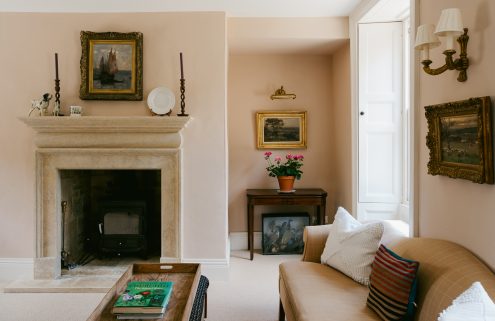