One of London’s most Instagrammed buildings could be yours

Turner Prize-winning architecture collective Assemble have put their pastel-hued Yardhouse studio up for sale for £150,000.

The modular, timber-frame structure – now available to buy via The Modern House – was built in east London by the architects in 2014, who added colourful handmade concrete tiles to its facade.

Yardhouse quickly became a cult location for London’s instagrammers who’ve shot thousands of pictures of the two-storey structure, which has been featured in magazines across the world.

Assemble created a double-height atrium inside the 250 sqm building, placing studios along its edges. However the barn-like Yardhouse was designed to be remountable and adaptive, allowing future owners to reconfigure it according to their needs.

Not included in the sale is a patch of land to put it on – you’ll have to find that separately.

Since completing Yardhouse – currently in storage while it awaits sale – Assemble scooped the 2015 Turner Prize for their Granby Street regeneration project in Liverpool. The collective are the first architects ever to win the art prize. 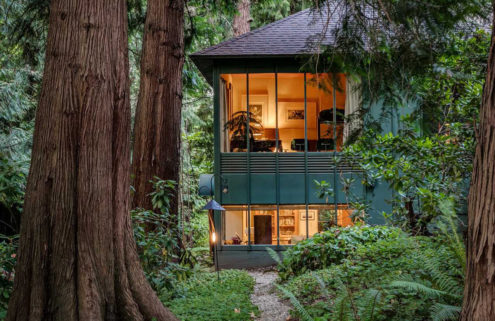