We delve beneath the surface of 1970s nightclub design

Party season is nearly upon us – but radical-minded architects can forget the tinsel, fake snow and budget booze this December and immerse themselves instead in the after-dark aesthetics of disco and beyond. A trio of books and exhibitions delve beneath the silver lamé surface of the nightclub, exposing, among other things, a liberated approach to interior space.

The book and exhibition Disco: The Bill Bernstein Photographs sees the one-time Village Voice photographer surveilling the golden days of disco-era New York, capturing regulars at Studio 54, Paradise Garage, Mudd Club, Hurrah and GG’s Barnum Room in the late 1970s. In repurposed warehouse spaces, politicians, artists, trans people and other fabulous creatures rubbed shoulders on the dancefloor until the AIDS crisis and the IRS brought the disco scene tumbling down at the end of the decade.

Proving that there’s (night)life beyond New York, the book Nightswimming explores half a century of discotheques through the photographs of Giovanna Silva and interviews with architects, DJs and glitter-ball intellectuals. Where Bernstein focused on the cast of characters that populated the clubs, Silva examines the spaces themselves – with design concepts ranging from spaceship control deck to mock classical – and the role lighting played in manipulating them.

Opening shortly at London’s ICA, a new exhibition Radical Disco gathers photographs of Italian nightclubs of the 1960s and 70s all of which were designed by groups affiliated to the era’s ‘Radical Architecture’, including Gruppo 9999, Superstudio and UFO. ‘One aspect to this story is that it’s all been forgotten, to be honest,’ explains curator Catharine Rossi. ‘There’s an idea that the Radical Architects didn’t build anything because they disassociated themselves from the industry.’

Rossi was disabused of this idea when she appeared at an ICA event with Carlo Caldini of Gruppo 9999, which created the cross-media experimental Space Electronic nightclub in Florence 1969. ‘He let slip that the club was still going, that he was still running it, and that he went there every night.’

Rossi followed up on Caldini’s revelation in her exhibit for the 2014 Venice Architecture Biennale, a tribute to Space Electronic that she created with Ben Kelly, designer of Manchester club The Hacienda. Rossi sees the idea of an architect-run nightclub as part of the polymathic Italian design culture that has also seen, for example, Gio Ponti founding Domus.

Drawing on the ideas of Umberto Eco and other theorists of the time, Space Electronic and other Radical Architecture discos of the era were conceived as sites for performance, aesthetic experimentation and sociocultural happenings as much as they were palaces to pleasure. ‘Space Electronic was inspired by Marshall McLuhan, new technologies and the liberating potential of electronic media,’ explains Rossi. ‘They had CCTV inside not for surveillance but so that people could see into other parts of the club and connect with them.’

As nightclubs close by the dozen in the UK and beyond, Rossi questions what is being lost in the wider culture. ‘Discos haven’t really featured much in architecture history in general, they’re not seen as serious as other spaces,’ says Rossi. ‘We’re maybe under appreciating the cultural importance of clubbing – clubs are portrayed as important in terms of music, performance and dress, but what other cultural experimentation are we losing concomitant with that?’

‘Nightswimming: Discotheques from the 1960s to the Present’ by Chiara Carpenter and Giovanna Silva is published by Bedford Press

‘Disco: The Bill Bernstein Photographs’ is out now, published via Reel Art Press. The release coincides with an exhibition at Serena Morton Gallery from 3 December-24 January 2016 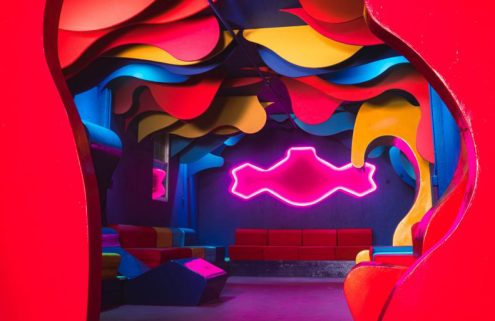