Ai Weiwei’s Beijing studio is being demolished – without warning

Today,they started to demolish my studio “zuo you”in Beijing with no precaution .which I have as my main studio since 2006.it is a East German style socialist factory building.farewell.

Ai Weiwei’s studio in Beijing is currently being torn down, according to a series of videos the artist has posted on Instagram.

Bulldozers can be seen ripping out the windows of the studio – which he describes as ‘a East German style socialist factory building’ – in the city’s Caochangdi Art District. The building has served as the artist and political activist’s main Chinese studio since 2006.

It’s the second of Ai Weiwei’s studios to be demolished by Chinese authorities: his purpose-built Shanghai space was bulldozed in 2011, the year he was arrested and detained for 81 days by the Chinese government.

Today’s demolition – done ‘with no precaution’, according to the artist – follows a series of eviction notices given to galleries and artists in the Caochangdi Art District, which Weiwei was instrumental in building. De Sarthe and X Gallery are among four galleries told last month that they need to move.

‘At the moment, there are only rumours about how the area will be redeveloped,’ de Sarthe director Willem Molesworth explained to The Art Newspaper in July.

Ai Weiwei designed many of the galleries and living quarters in the area, which, until 2000, was just a village on the outskirts of Beijing.

In August 2017, ArtAsiaPacific reported that authorities had forced artists from their homes and studios in Caochangdi. The residents were reportedly given written notices telling them to leave the site due to ‘illegal construction and land use’ on more than six acres. 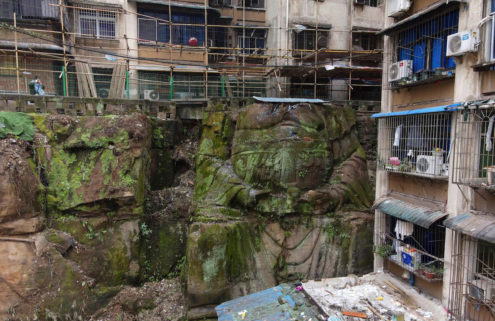 Yichang’s Mountain and Cloud Cabins are ‘spaceships in the woods’