7 of the best midcentury homes for sale in the US

A stellar cache of midcentury homes are currently on the market in the US, ranging from perfectly preserved 1950s time capsules to faded gems crying out for revival.

Among them are properties designed by 20th-century bigwigs Richard Neutra, Rudolph Schindler and Frank Lloyd Wright Jnr. But there are also hits from lesser known stars.

Mcleod’s midcentury home – for sale via Matt Berkley of Crosby Doe Associates for $799,000 – was designed by the latter and built in 1954. It’s been meticulously preserved through the decades.

As well as a plethora of glass (the ‘nearly two-storeys-tall’ living room has clerestory windows that look out all ways onto the garden), there are exposed beam and timber ceilings across the 2,514 sq ft property. It comes with four bedrooms, and is currently being earmarked by the County of Los Angeles as a Cultural and Historic landmark.

$4.2m
Palm Springs is a gold mine of midcentury homes and the Edris House, designed by E Stewart Williams in 1954, is one of its most beloved historic landmarks. ‘It’s kind of like living with a movie star,’ says its current owner, JR Roberts. The stone clad single-storey dwelling has a gently sloping roof and floor-to-ceiling windows across the back which look over the Coachella Valley. Roberts, with consultation from Williams, restored the property to its original layout and details in 2000 based on photographs by Julius Shulman taken when Edris House was first complete. It’s now listed for sale via TTK Represents for $4.2m.

$2.595m
Built by Viennese architect Rudolph Schindler in 1946 for Universal Studios art director Mischa Kallis, this multi-layered Los Angeles property is clad in vertical split-stake wood fencing, designed to help it blend naturally into the hillside. It was originally conceived as two structures connected by an outdoor terrace but in 1960 architect Josef Van der Kar integrated the buildings, enclosing the terrace to create a new living space inside the midcentury home – for sale via Crosby Doe Associates for $2.595m. Its four bedrooms and three bathrooms are slung across the hillside over a number of gradations.

$1.35m
The exterior of this five-bedroom midcentury home in Illinois may need a refresh but, step inside, and it’s a different story. Here, a wealth of enticing features await, including exposed brickwork, beamed ceilings and timber flooring – all in pretty good nick. Yerkes and Grunsfeld designed the house in 1965, giving it an open-plan layout and extensive glazing. Living spaces open out onto a somewhat lacklustre garden, so buyers will need to be green fingered. The house is for sale via Sotheby’s International Realty for $1.35m.

$1.542m
Here’s another midcentury fixer-upper with bags of potential, this time in Greenwich, Connecticut. Designed by architect E H Paul, the two-storey property has original wood-panelling, floors, beamed ceilings and cabinetry throughout. Its biggest feature however is its ‘front-to-back’ double-height atrium entrance with a handsome wooden staircase, and balcony with an enormous floor-to-ceiling strip of glass. It also comes with four bedrooms and seven acres of land. Find out more via Estately.

$2.495m
Embedded in a ridge in the Hollywood Hills, the De Jonge residence is a midcentury home with serious pedigree… Frank Lloyd Wright Jr designed the pavilion-like property for Dutch actor Daniel De Jonghe in 1959 from stone, concrete, glass and wood. The 2,100-sq ft house is listed with Crosby Doe Associates and Architecture for Sale for $2.495 million, and has undergone a complete restoration by midcentury specialist John Powell in more recent years.

The JM Roberts Residence by Richard Neutra in Los Angeles

$1.795m
Modernist maestro Richard Neutra designed the JM Roberts Residence in 1955, but the four-bedroom property fell into serious disrepair over the decades. In 2014, it underwent an extensive two-year-long restoration, which took the West Covina property back to near-original state. It has lofty, beamed ceilings, terrazzo and cork flooring and a fossilized stone double fireplace. The mid-century home is co-listed by Ilana Gafni of Crosby Doe Associates and Nate Cole of Unique California Properties for $1.795m. 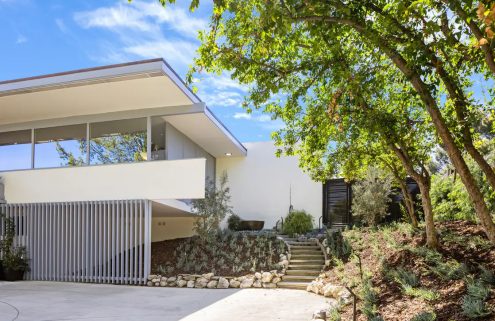