6 architects design ‘the house of tomorrow’

Rethinking the British home for a new show at the RIBA

A mansion block for the 21st century and conceptual terraced houses where party walls are replaced with shared communal spaces are among the provocative proposals for future housing presented at a new London exhibition.

The Royal Institute of British Architects (RIBA) invited six contemporary architecture practices to create speculative responses to the UK’s housing crisis for the exhibition, At Home in Britain: Designing the House of Tomorrow.

Drawing on materials from the RIBA archives, the studios from the UK, France and the Netherlands produced designs that re-examine the familiar housing typologies of the cottage, terrace and flat.

‘We are in the midst of a housing crisis so it seems very timely to have a debate about this subject,’ says RIBA Head of Exhibitions, Marie Bak Mortensen.

‘We think it’s a great fallacy that architects are rarely involved in designing our homes, which is why we asked these six practices to develop schemes for the house of tomorrow.’

They were asked to reassess the characteristics of the three housing typologies and propose ideas that could help them meet the changing needs of modern living.

‘There is a sense of nostalgia around housing in the UK and a tendency for young people to want what their parents had rather than thinking differently about their own needs,’ Mortensen adds. ‘This is a way to break down those classical typologies and see them from different viewpoints.’

Among the works on show, British architect Jamie Fobert’s scheme shows how modern cottages could be slotted into the fabric of a traditional English village as an alternative to mass-produced suburban housing estates.

London studio vPPR’s response examines the relationship owners of terraced properties have with their neighbours. ‘Party House’ proposes replacing the party wall between dwellings with a communal space that neighbours can use for work, play and shared activities.

Dutch firm Mecanoo has tackled the typical London mansion flat, reimagining it as a block holding homes of three different sizes to be occupied by varying demographics. Shared spaces, such as a gallery-like lobby and courtyard, are positioned in the gaps between the different housing units.

Commissioned projects sit against a backdrop of a curated display showcasing drawings, catalogues, photographs and other items from the RIBA’s archive that highlight specific themes from each typology.

The exhibition is part of a collaboration with the BBC, which will air an accompanying three-part television series titled Dan Cruickshank: At Home with the British, starting this Thursday. 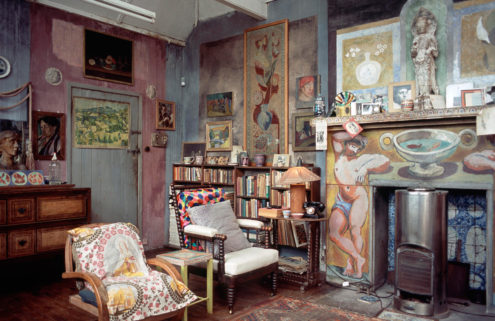