A Toronto factory has been transformed into Drake Commissary – a food hub where visitors can dine surrounded by vintage and contemporary design.

Local studio +tongtong oversaw the restoration of the building, which is now a restaurant, bakery, bar and larder. ‘We started with the premise that this is a brick and beam space with texture and a rich history,’ said studio founder John Tong.

‘We used design elements in an architectural way,’ added Tong. ‘They all contribute to create flow from one space to another, dovetailing and layering, leading and reframing views while also defining very distinct spaces.’

The Drake Commissary’s bar area includes bespoke stools with a distinctive single arm, designed by +tongtong to encourage interaction between diners. Elsewhere, spaces feature a mix of old and new pieces, including vintage furniture sourced at flea markets and re-upholstered in patterned fabrics.

The studio also commissioned local artists to create pieces for the hub, including a 35-foot-long landscape mural by Alex McLeod, resin sculptures by Camille Jodoin-Eng, and hand-painted tabletops by Dahae Song. Its kitchen, which will also host workshops for locals, is wrapped in a glass wall, so guests can watch food being prepared. Outside, the building’s historic signage has been merged with new lettering.

Drake Commissary is a project of Toronto haunt The Drake hotel, and is situated in the city’s Junction Triangle area, which will soon be home to the Museum of Contemporary Art Toronto Canada – set to open in 2018.

Read next: Broadview Hotel reinvents a Toronto landmark with a sketchy past 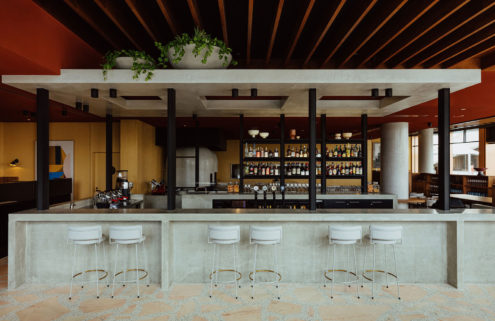 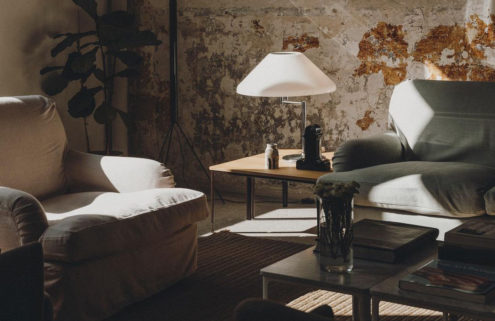 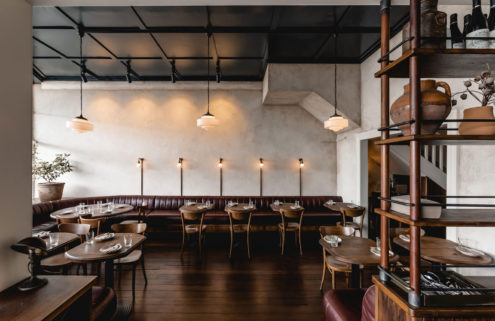