In the small suburb of Glencoe 20 miles north of Chicago architect Jeanne Gang has produced a $34 million theatre centre that strives to become the town’s leading cultural hub.

‘We wanted to build a modern icon in the place that supported us from day one,’ says Writers Theatre artistic director and co-founder Michael Halberstam. The burgeoning performing arts group – which started life in the back of a bookstore in 1992 before moving on to the now-demolished Glencoe Woman’s Library Club – cut the ribbon for its first permanent home on Friday.

‘We were somewhat wary of commissioning an architect whose star was on the rise,’ recalls Halberstam. How much would Gang, whose works by 2011 included Aqua Tower and prominent park designs, want the project? Gang won them over by promising the most intimate theatre in the world.

‘We think she pulled it off,’ says Halberstam. ‘There’s nothing austere about the building. It has an immersive friendliness that at once achieves dramatic flair.’

The new theatre is a patchwork of volumes that respects the scale of buildings around it. The glass-walled atrium and lobby invites public gathering and casual performances, with an open floor as informal stage bracketed by carved-wood seating tribunes. The space glows at night, drawing the town’s gaze, and in the warm season activity will spill into an adjacent public park.

Programmatically, the design merges the first two iterations of Writers Theatre in a 99-seat black box venue and a main stage for 250. Though the main stage seats twice the guests of the theatre’s previous home, it gives an almost identical experience in sight and sound. Bricks recovered from the Woman’s Library Club create an acoustic screen carefully calibrated for reflection and diffusion at the back of the house. ‘There’s a soft bounce off every surface, what Gang terms a “forest sensation”,’ notes Halberstam.

Rehearsal rooms and a rooftop terrace round out the new facility. 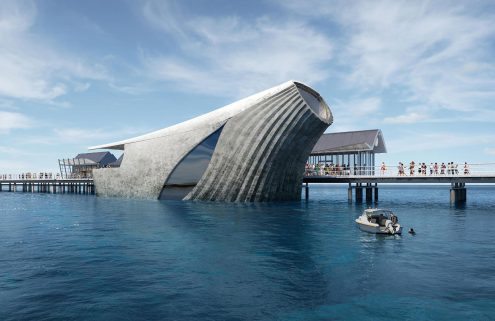 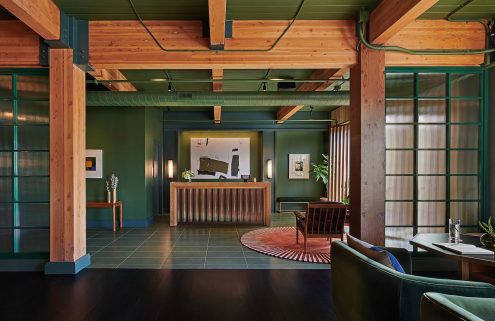