Architecture, Interiors I by Betty Wood and Emma Tucker

Nightclubs that look as good as they sound

Creating an iconic nightclub requires more than just a stellar roster of DJs. Space is as important as sound in these 12 clubbing meccas across the globe, set in everything from abandoned power plants to former train stations. Equipped with LED lighting installations and ‘sunrise dance floors’, these are clubs you’ll never want to leave…

This Brazilian nightclub got glowing reviews when it opened in 2003, thanks in part to its LED lighting system which responds to the club’s music, bringing audio and visuals together. Designer Muti Randolph – who made his name creating eye-boggling art installations and video sets – created D-Edge’s luminous interiors.

Fast-forward to late 2010, and the club added new spaces to its repertoire: a third floor terrace, kitted out with sofas, mirrors and chairs by designer Konstantin Grcic; and a smaller, LED-lit dance floor overlooking Oscar Niemeyer’s Latin America Memorial.

Cult American actor and director John Malkovich is the part-owner of this veteran Lisbon hangout, which opened in the 1990s when the city was establishing itself as one of Europe’s best clubbing meccas.

A little off the beaten track, Lux can be found in the city’s warehouse district overlooking the riverfront. Inside, it’s divided into a club space – which features ‘kerplunk’ style stripped lighting – bar and terrace.

‘My vision was to make a club like an art space: white walls, a black wooden dance floor enabling people to dance longer, fewer lights to keep the focus on the good sound system, and nothing else,’ says Robert Johnson’s co-founder and resident DJ Ata Macias. This Frankfurt club is uber minimalist and everything has been designed to be removable. ‘We can make it feel bigger and we can make it feel smaller. It’s like stepping into a friend’s living room.’

Situated on the volcanic island of Stromboli in the Mediterranean Sea, Club Mega is a bit different from the other nightclubs on this list. For a start, it’s pretty hard to get to – two hours by boat from the mainland – and it’s not so much a building as an open-air amphitheatre, overlooking the sea. But that makes a visit to this musical outpost all the more rewarding. Take a look around the Stromboli nightclub in our photo essay on the island.

Visitors to this club on the edge of Rimini are greeted by an imposing entrance, framed by white columns and an array of towering Roman statues. Inside, the ancient Rome theme continues in the form of animal head fountains and even more doric columns.

Open since 1975 – and one of the first in Italy to run until 6am – Baia Imperiale is set over three levels, with enough room for 8,000 people. There’s also a swimming pool and views of the sea from the dance floor.

Inhabiting a former power station in Berlin’s Mitte district, the enormous Kraftwerk industrial complex is home to cult techno club Tresor, OHM as well as an ongoing exhibitions programme. The station was abandoned in 1997, and renovated by Tresor founder Dimitri Hegemann in 2006. Upholding the city’s reputation for uncompromising venues, Kraftwerk maintains the concrete corridors of its former life, immersing club-goers in industrial surroundings. The building is also set to become home to Berlin’s first techno museum, which is scheduled to open later in the year.

This essential Paris club is housed in the former Charonne train station, which was taken over and renovated by Ecole des Beaux-Arts students in the 1990s. Named after the Golden Arrow – a luxury steam train that connected London and Paris from 1929 onwards – Flèche d’Or is on the compact side, with a capacity of just 490. The original architecture of the station remains unchanged, and the club’s lounge area looks back onto the abandoned ‘little belt’ railway line, which encircles Paris.

At the back of The Year, there’s a second spot for revellers offering a different vibe altogether… The Yard is an informal chill-out lounge that features a retractable roof and hanging gardens.

Since 2000, Womb has been the heartbeat of Tokyo’s music and fashion district, Shibuya, and it is constantly ranked in the top three clubs in the world. The 1,000 capacity space is spread across four floors and kitted with strobe lighting and lasers. CNN described its interiors as being ‘more like a spaceship than a nightclub’: perhaps its most prominent feature however is the 1.5m metre diameter disco ball which hangs from its ceiling. The club claims it’s the largest in Asia (and we’re not going to argue.)

Formerly the headquarters of the Mexican Communist Party, MN Roy is one of Mexico City’s hottest nightspots, in part for its sleek interiors which feature copper tiles, concrete floors and rough timber block walls. French duo Emmanuel Picault and Ludwig Godefroy of Chic by Accident designed the space, whose dance floor is capped by a soaring timber pyramid.

Since the 1970s, Ibizan megaclub Amnesia has been keeping the party going, hosting house, techno and trance nights.

The club features its own, custom-made sound system designed to ‘hone’ frequencies that physically affect the bodies of dancers, and an enclosed greenhouse terrace ‘sunrise dance floor’ allows patrons to watch the sunrise without leaving the comfort of the club.

Berlin’s most famous nightclub is also one of its most striking. Like Tresor, it inhabits an abandoned power plant in the city and has become ‘the church of techno’ under the tutelage of founders Michael Teufele and Norbert Thormann.

Inside, Berghain features a 59-ft-high dancefloor with space for 1,500 clubbers. Expect tons of concrete (literally) and industrial steel finishes. Upstairs is the smaller Panorama Bar, which is hung with photographs by German photographer Wolfgang Tillmans and has enormous windows with views of East Berlin.

Read next: The experimental pleasure of disco design 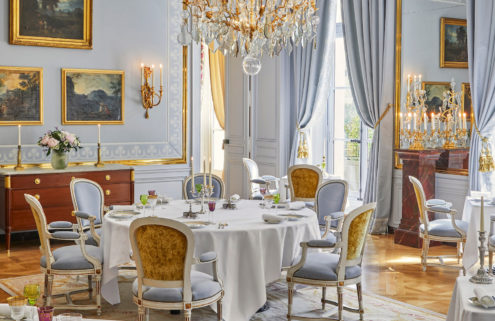 You can now check in at the Palace of Versailles 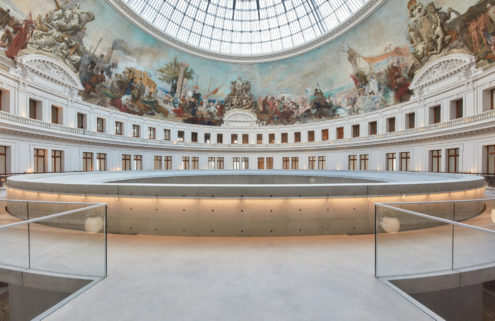