Rome: “The most wonderful movie set in the world”
Back to The Spaces

Puccini called the medieval town home – but in the 1960s, it drew American musicians, including Prince of Cool, Chet Baker

An hour from Florence, the medieval town of Lucca sits in the centre of a magnificent landscape sculpted by the river Serchio. In the 16th century, Saracen invasions demanded that Lucca fortify itself, so its immense artistic and architectural heritage is ringed by a colossal circuit of walls. These help keep the modern world out, protecting the town's rich history, and passing through them is like entering a different era.

As Lucca grew and modernised over the centuries, its fortified walls lost their military importance and became a promenade for 'passeggiata', the Italian tradition of a gentle and slow stroll. The green grass and trees that line them today mean they have become a giant park that encircles the town. 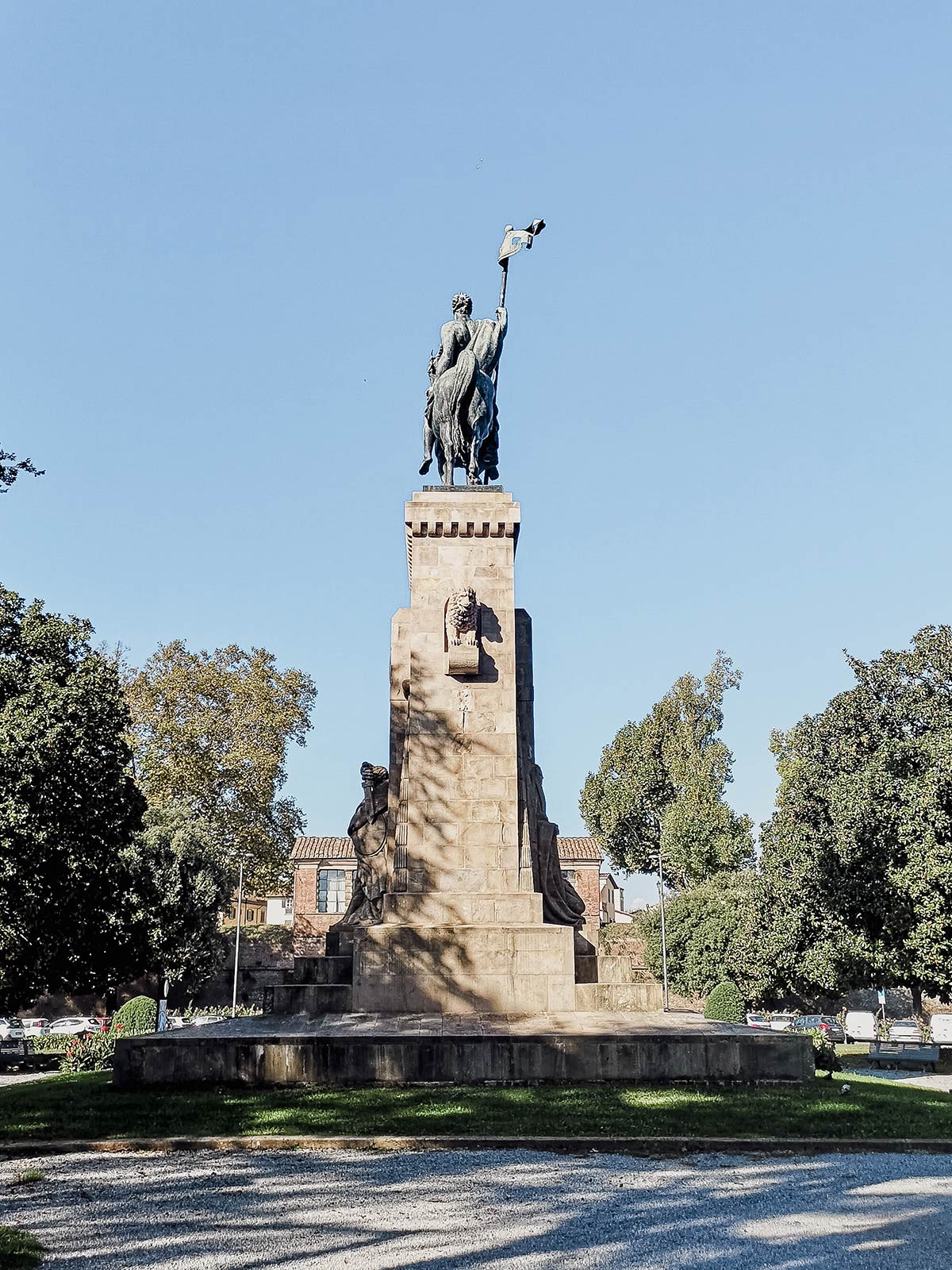 Lucca is one of Tuscany's secret gems, favoured by the quieter visitor. It’s a town filled with the Italian pastry shops and bicycles of our imagination but located far from the madness of larger cities.

Its architecture bears witness to this sometimes tumultuous history, but it also has a legacy of reinterpreting its past – for example, the Roman amphitheatre that was converted into the piazza dell'Anfiteatro by architect Lorenzo Nottolini in the 19th century. 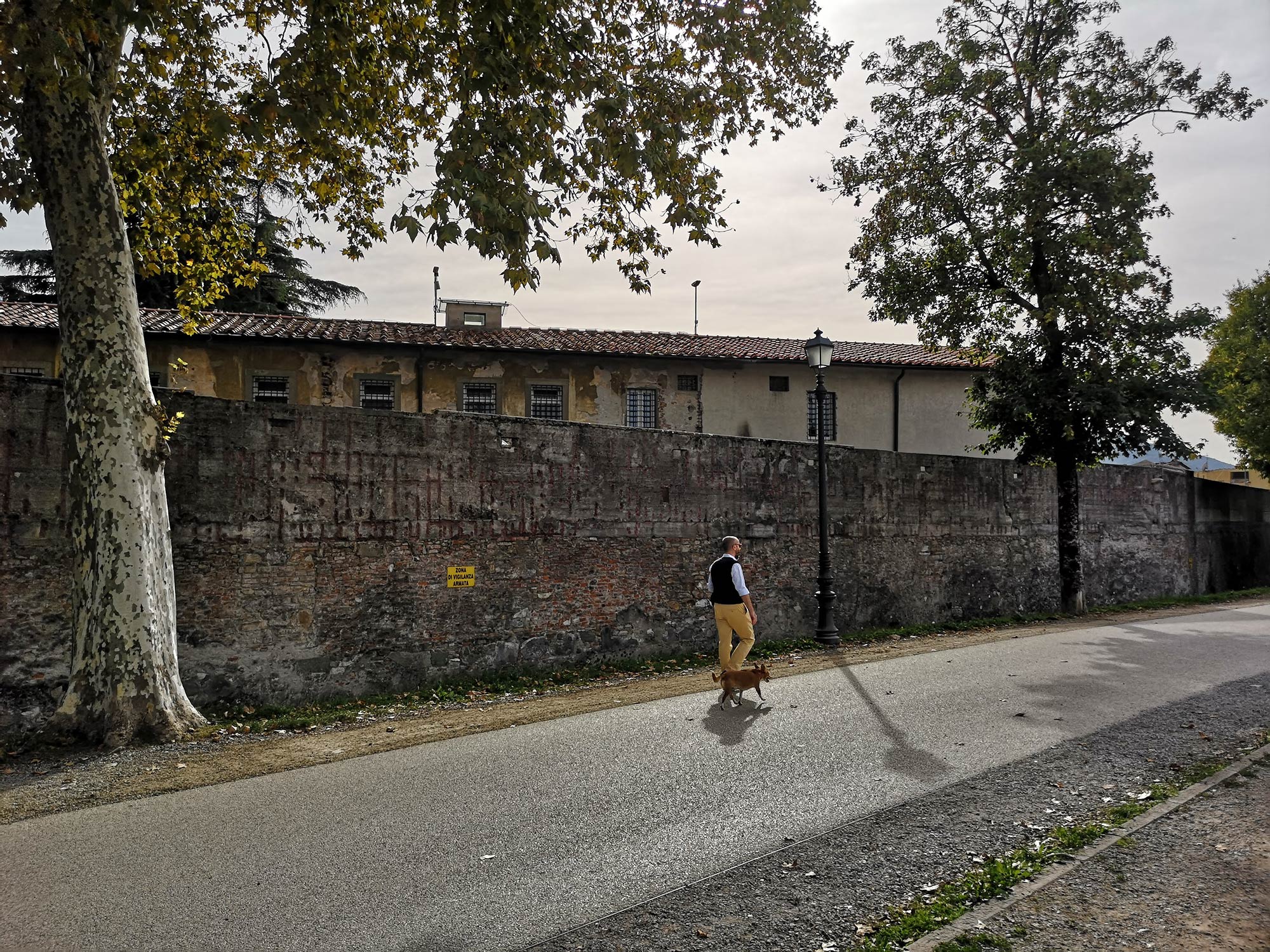 The Torre Guinigi rises above the town, crowned in green with centuries-old oaks and now an attraction you can pay to climb. At the time of its construction in the 1300s, more than 250 towers were built throughout the town as a symbol of power and wealth; the higher the tower, the higher your status. With the impressive gesture of planting trees at the top of theirs, the Guinigi family could proudly call theirs the most elevated. 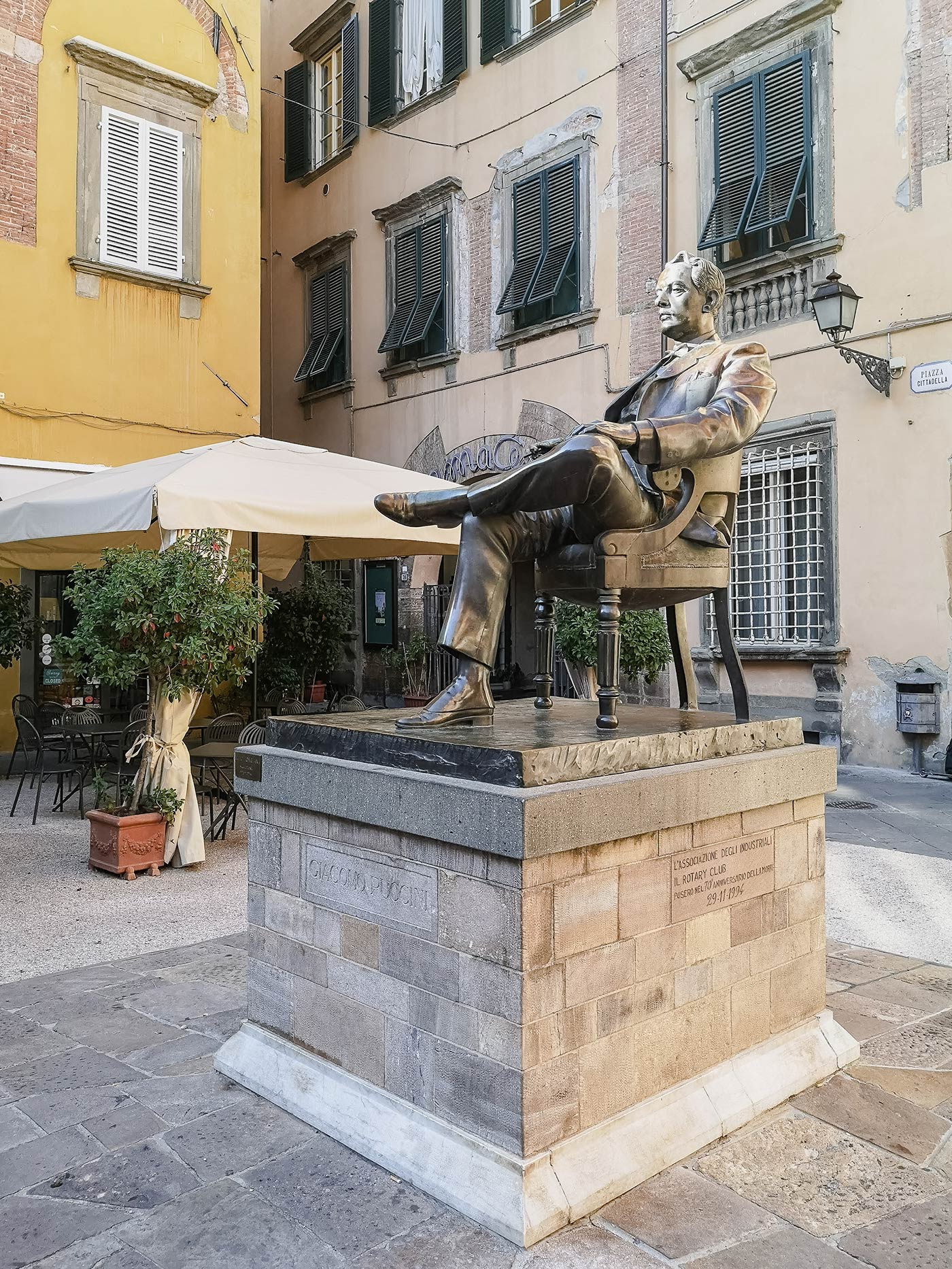 Italy is a country of heroes, and at the Romanesque church of San Michele, the façade is sculpted with portraits of them, including Giuseppe Garibaldi. One of Lucca's most illustrious sons was composer Giacomo Puccini, born in 1858 in the Casa di Corte San Lorenzo, which is now home to the Puccini Museum.

Puccini’s private life was famously as colourful as his operas. As well as being the most famous composer of his time, he was one of the wealthiest men in Italy; equally successful and depressive, a misogynist and a womaniser, his work echoed his life. He was reputed to have once described himself as ‘a passionate hunter of water birds, texts and women.’ And by all accounts, he was a passionate, yet terrible, hunter.

For those looking to find Puccini, he was once a regular at Caffè di Simo in Via Fillungo, where visitors can enjoy a nostalgic afternoon inside its well-preserved timewarp interior before strolling to the nearby Church of San Giovanni, where opera recitals of his work still take place every day at 7 pm.

It was an adopted son of Italy, no less scandalous, that thrilled another generation, though.

While many people know Lucca for its classical musicians, not everyone knows that since the 1950s, the town's walls beat to a different rhythm. In 1947, the Hot Club Lucca emerged to spread jazz throughout the city. After years of clandestine activity under the Fascist regime, the youth were finally free to listen to the incredible new music coming from America, and the number of local jazz artists and fans exploded.

'Chet Baker has the face of an angel and the heart of a demon! Trouble comes to anyone who touches him!' – public prosecutor, Fabio Romiti

Out of this young blood came the most important Italian jazz group, the Quartetto di Lucca, formed just a few steps from the town's Duomo in a basement in Piazza San Giovanni.

In the heyday of the 1950s, Lucca, together with the nearby Versilia Riviera, became a cultural mecca for jazz. The beach club La Bussola, owned by the legendary theatrical impresario Sergio Bernadini, was turned into a temple featuring the most famous Italian and foreign artists of the time.

Towards the end of the decade, many US jazz artists did not limit themselves to performing only in larger cities. They also played in these smaller cities of Tuscany due in part to this reputation, much like the pilgrims on their way to Florence and Rome in the Middle Ages who used Lucca as a 'resting station'.Among them was the angel-faced trumpet player Chet Baker. 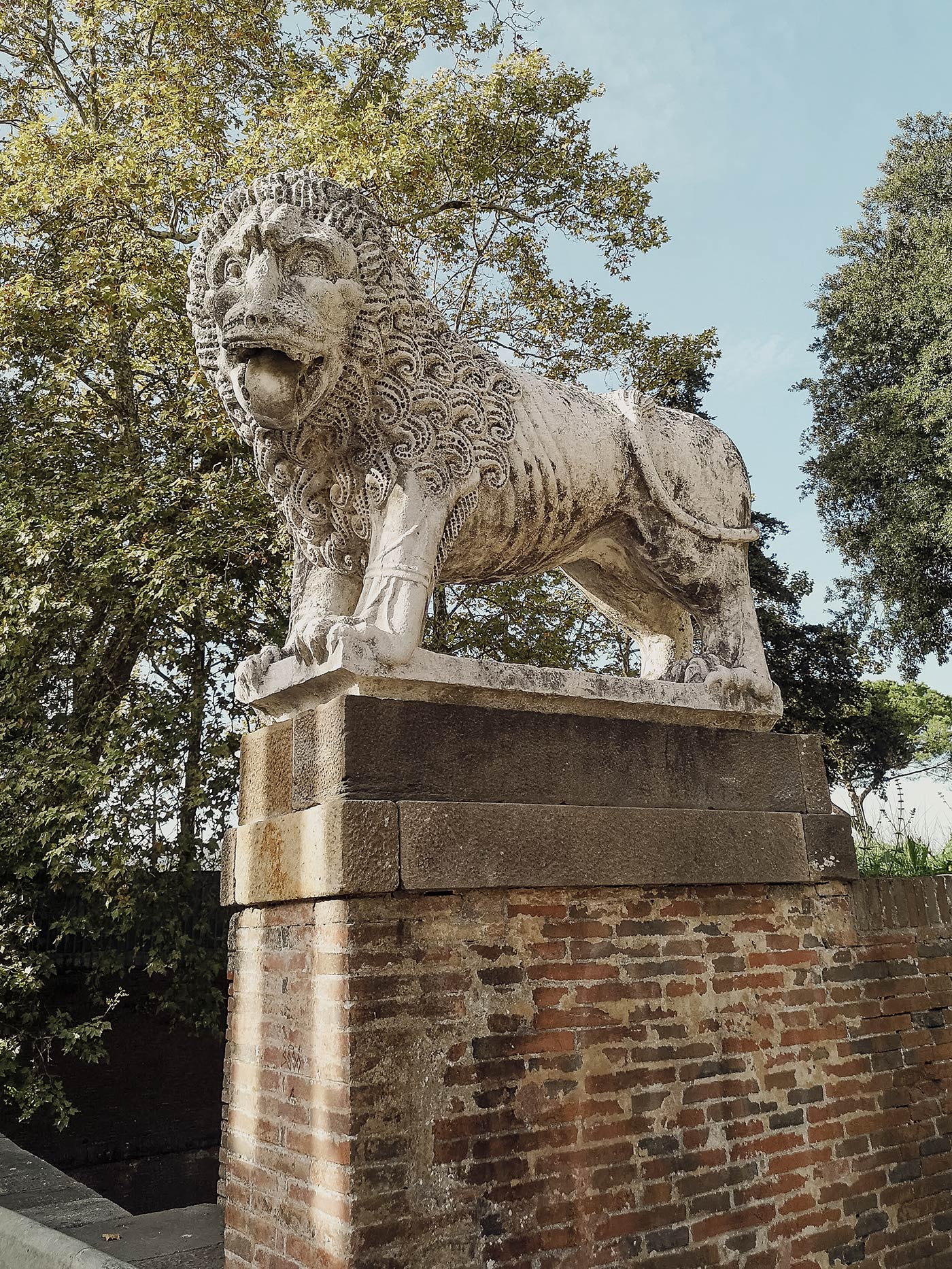 Baker arrived for the first time in Florence in 1956 and became a regular visitor to Tuscany, where he became great friends with Giampiero Giusti, the drummer of the Quartetto di Lucca. Together they played a concert tour of Italy in 1959.

Bernardini often called him for concerts at La Bussola but also to the small, after-hours clubs for jam sessions where night bled into the early morning. 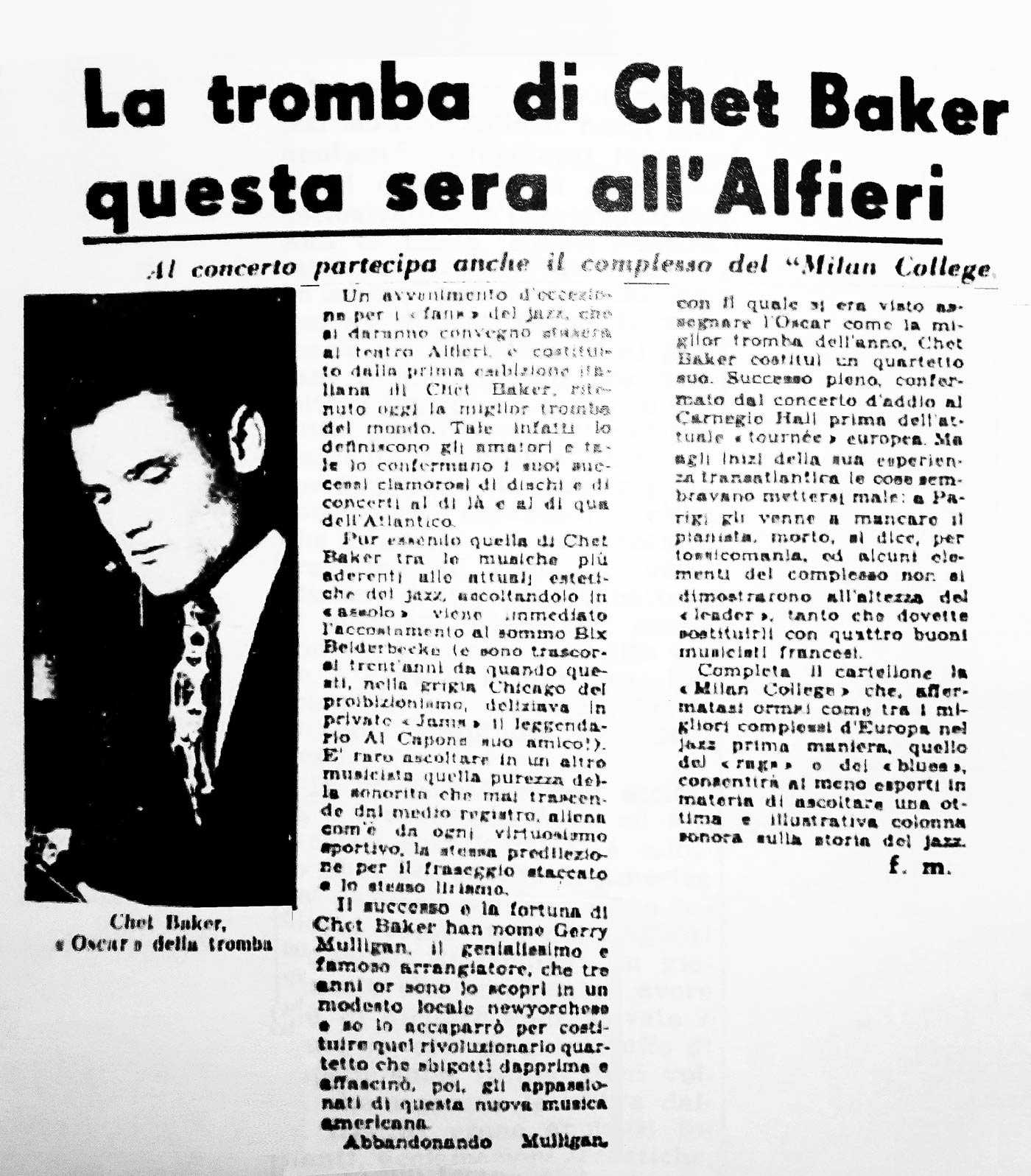 In 1960, Baker was exiled to Italy to try and escape his drug problems in the US. Unfortunately, a doctor – and devoted fan – had introduced him to Pallium, an opioid three times more potent than morphine, and he became instantly hooked again. 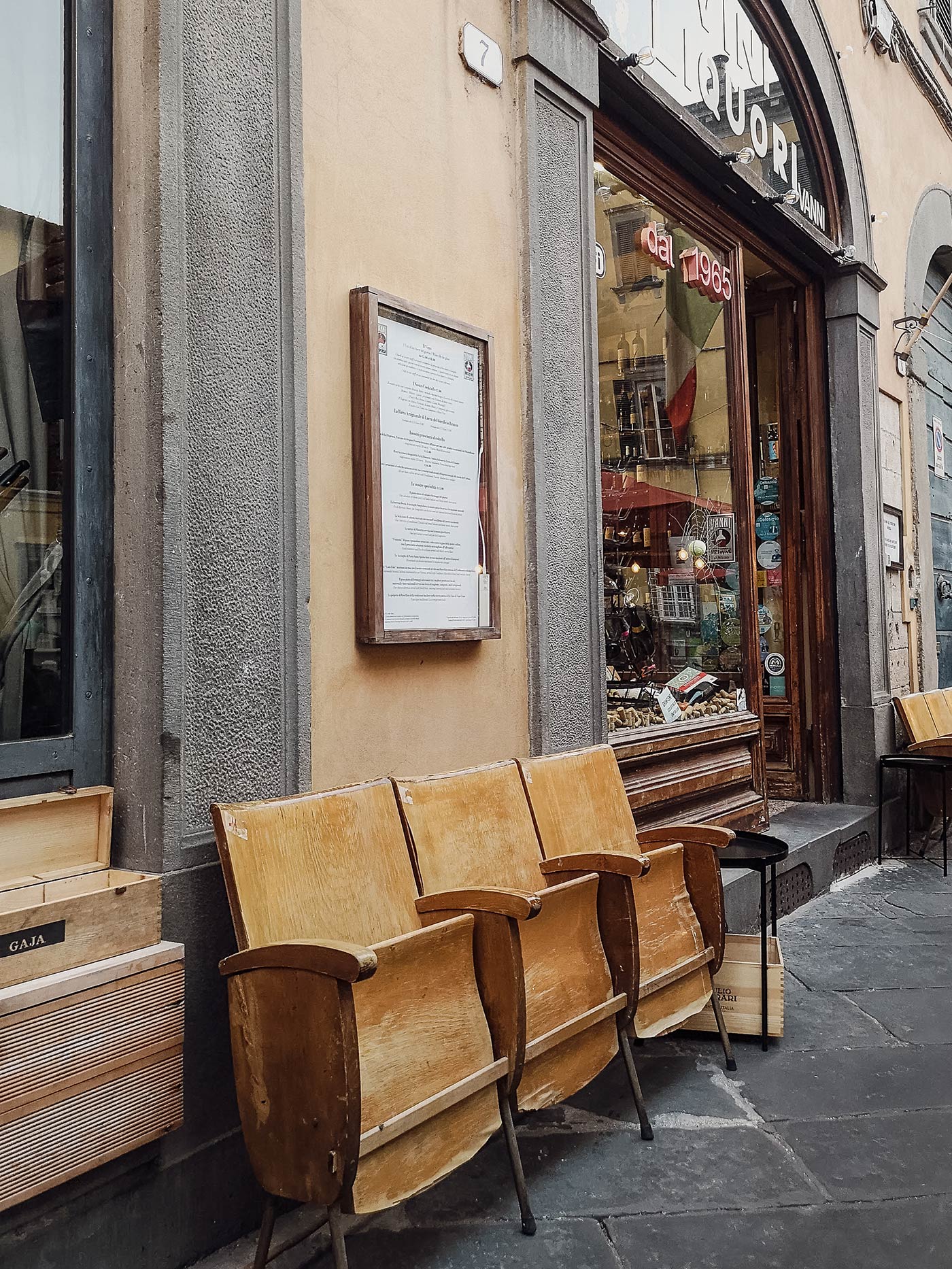 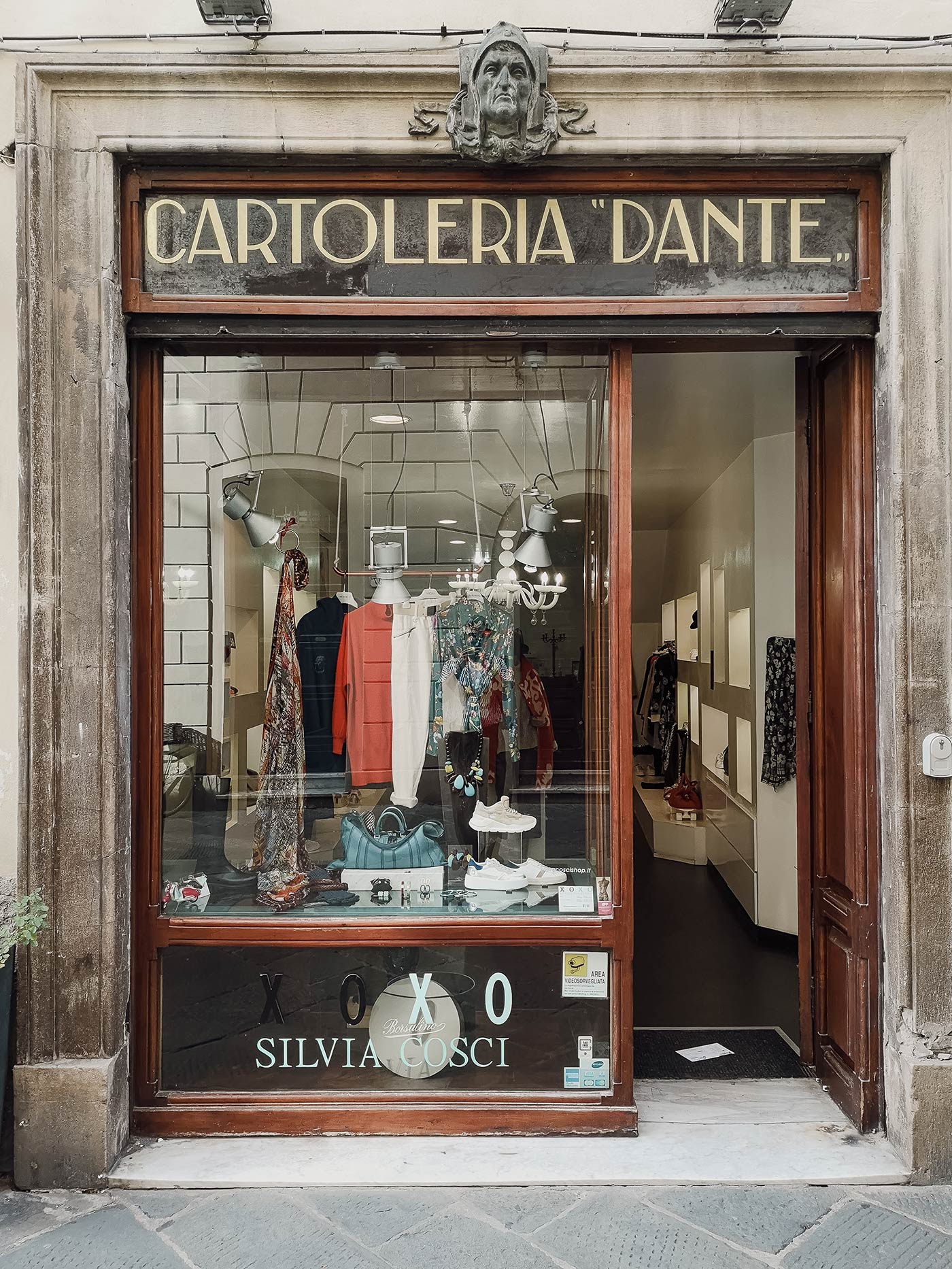 To drink: Vinni Liquori Vanni, Piazza San Salvatore 7, 55100, Lucca Italy. One of the best wine shops in Lucca (if not Italy)

To eat: Ristorante Buca di Sant’Antonio, Via della Cervia, 3, 55100 Lucca LU, Italy. In the heart of the beautiful historic centre of Lucca, the Buca di Sant'Antonio is one of the town's oldest restaurants. It specialises in traditional Tuscan cuisine.

To do: Passeggiata. Lucca is a wealth of independent art galleries, cafes, street book markets, and botanical parks – all of which can be found by meandering around the walled town. Lucca Jazz Donna will be returning in July 2023.

On his way back to Lucca from a gig at La Bussola, he was arrested by police in a petrol station toilet, where he had been trying to score a fix. Following the trial, conviction, and appeal at the end of 1961, the American known in court as Chesney Henry Baker was sentenced to 16 months in Lucca's town prison.

'Chet Baker has the face of an angel and the heart of a demon! Trouble comes to anyone who touches him!' warned Fabio Romiti, the public prosecutor.

However, Baker was a model prisoner and was rewarded for his good behaviour with twice-daily five-minute trumpet sessions in his cell.

Word of this, and likely the sound of his trumpet, spread through the town, and soon people began gathering around the prison's walls to hear the incredible jazz that flowed from Baker's barred window.

Just before Christmas 1961, as he left San Giorgio prison, his friends Giovanni Tommaso, Franco Mondini, Antonello Vannucchi and Amedeo Tommasi held a concert in his honour outside the prison walls. When he left, he was clean, spoke good Italian and played like never before. 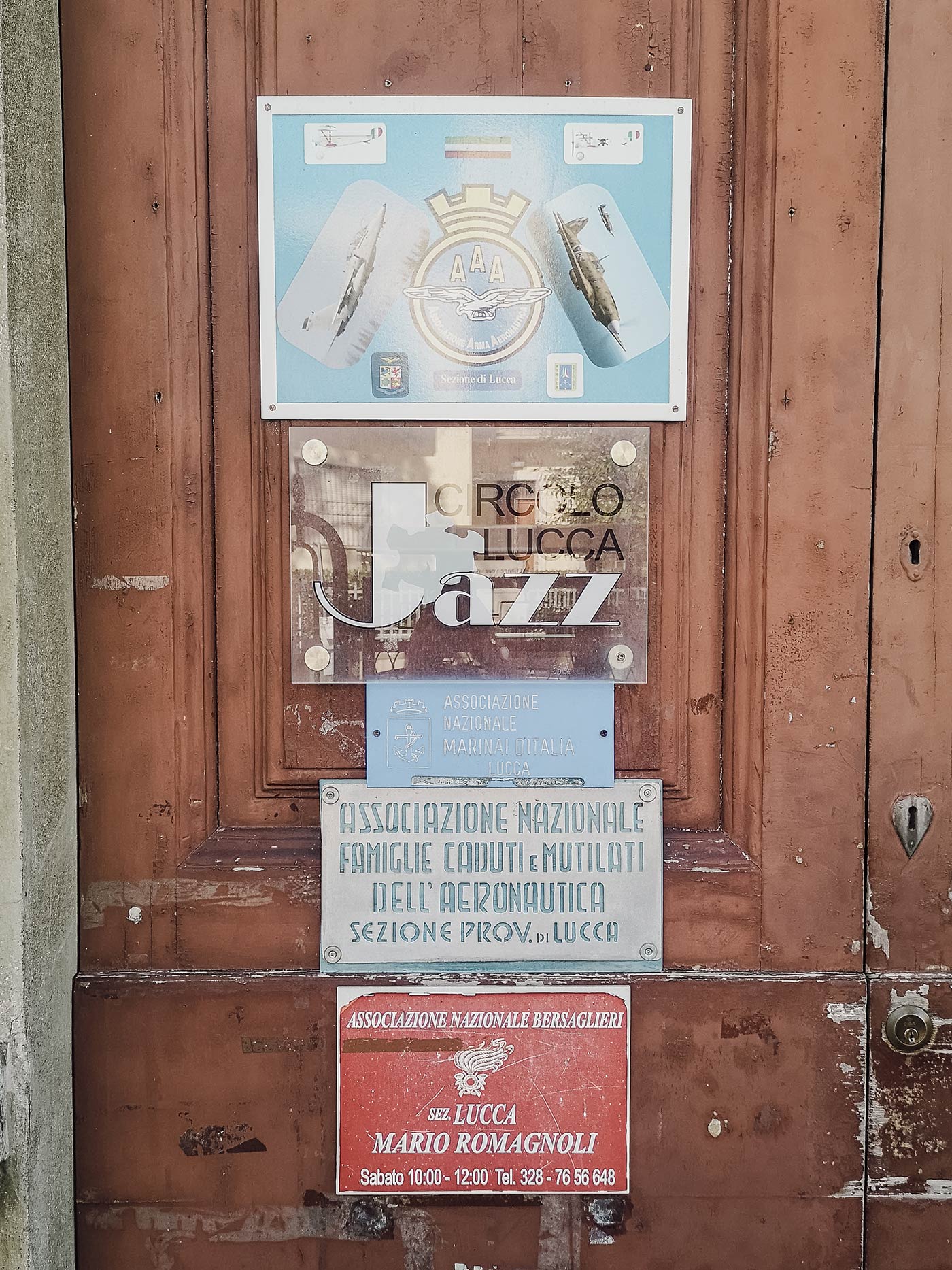 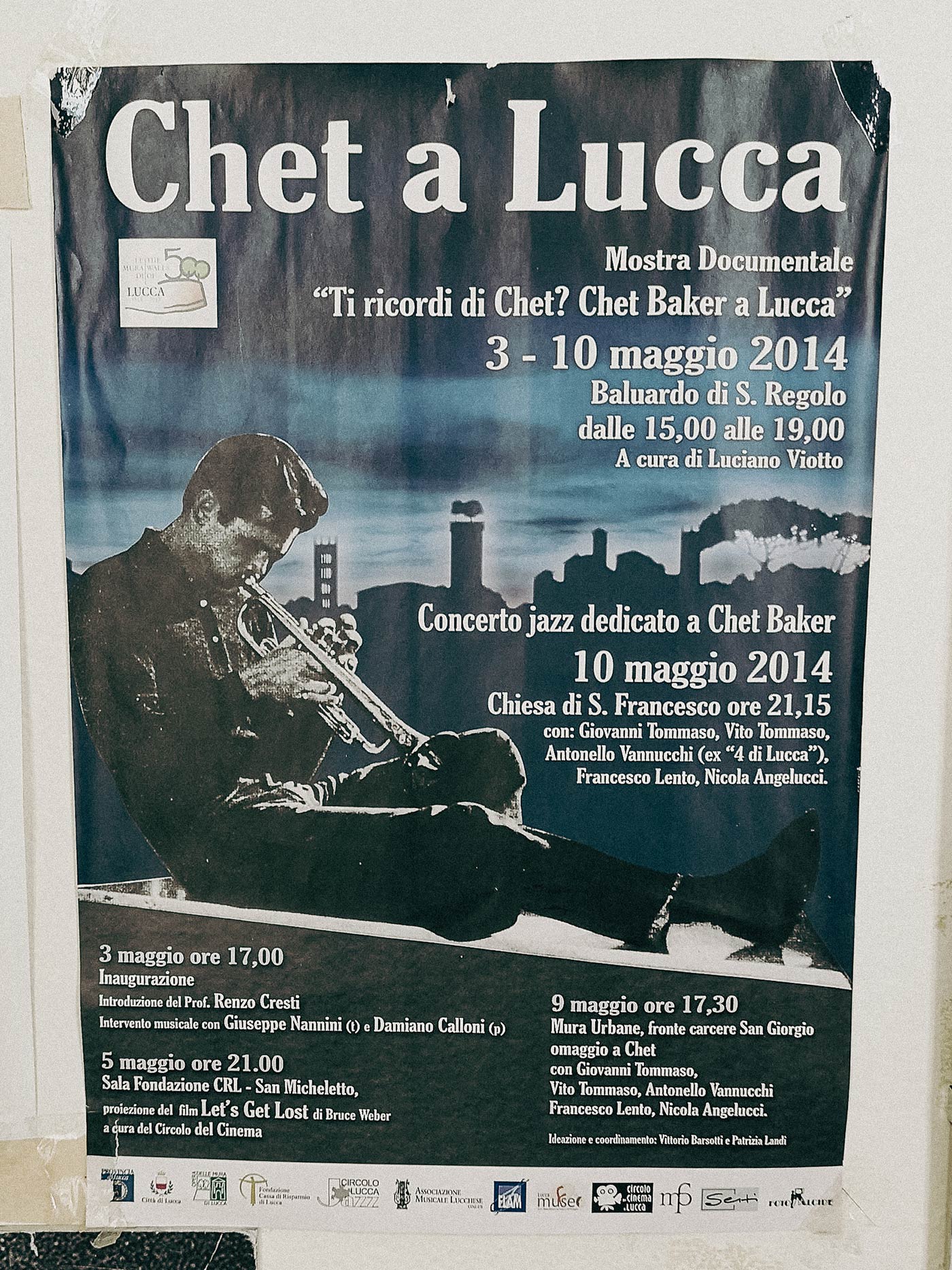 'We played with Chet Baker's first tour in Italy in 1959 and after Chet got out of jail in Lucca in 1961, he asked our Trio with Amedeo to go on tour for six months as the Quintetto di Lucca,' said Tomasso.

Today, the Circolo del Jazz, a direct descendant of the historical Hot Club Lucca, organises the Lucca Jazz Donna. The annual festival is exclusively dedicated to women and brings some of the biggest stars in the jazz world to the town.

It’s not possible to stop time and stay in the golden era of the 1960s, but more than half a century on, Lucca is still a powerful distraction from the modern world. And while it may not have its angels or demons anymore, it will always have a soul. 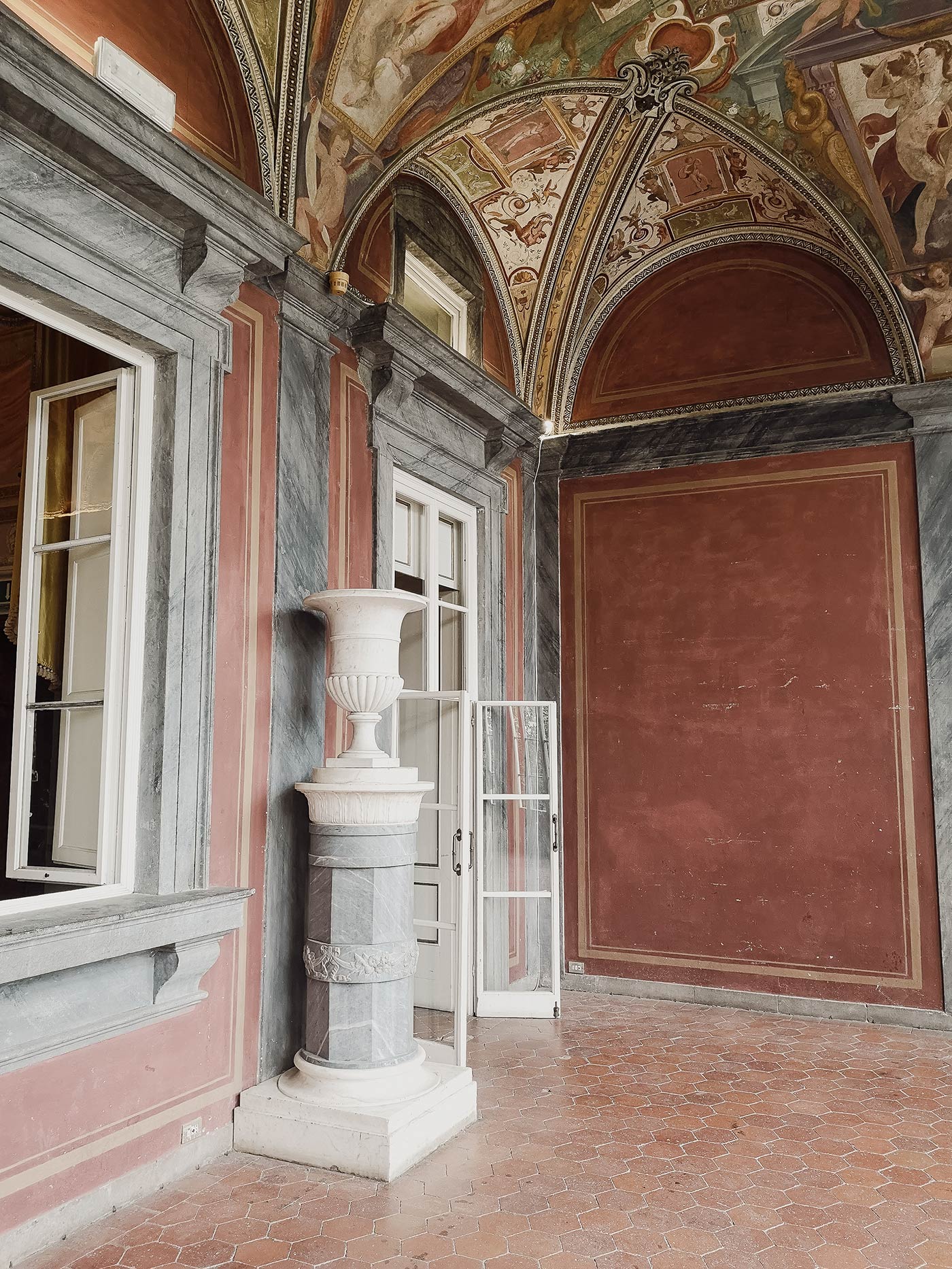 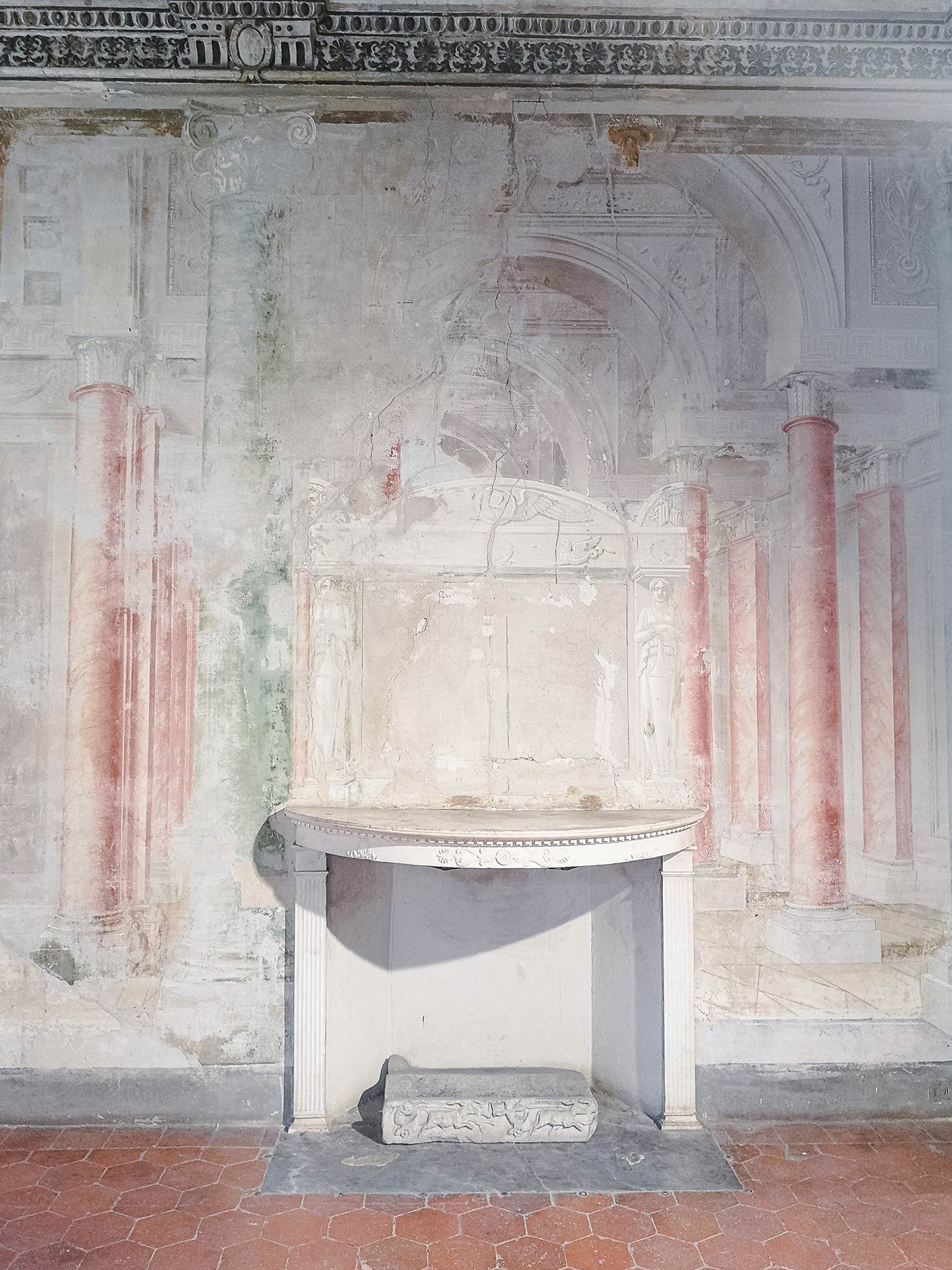 Back to The Spaces