A pair of giant hands lift the ribbon-like Golden Bridge up in the air above Vietnam’s Trường Sơn Mountains.

The shimmering structure emerges from the trees of Thien Thai garden in Ba Na Hills. Set more than 1,400m above sea level, the bridge incorporates eight spans and extends 150m-long. Its green hands have been aged, as if they’ve been there for centuries.

Lobelia Chrysanthemums are planted along the latticed sides of the bridge, like purple embroidery. Opened in June, the bridge is reportedly part of a $2 billion project to accommodate tourists in the area.

A designer has yet to be attributed to the project, though concept renderings by TA Landscape Architecture can be found online.

Ba Na Hills is a mountainside resort, establish by French colonists in 1919. Close to the city of Da Nang, it once held some 200 villas but today, only a few ruins remain. Ba Na Hills now holds a Fantasy Park and a ‘French village’, with cobbled streets.

Read next Building bridges: 7 designs that link cultures and communities 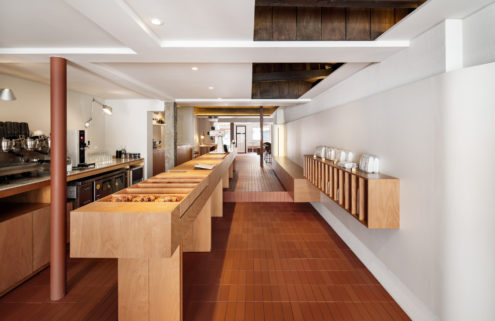